From the early 1960s to the late 1970s, welfare recipients organized in local collectives across the United States. Under the umbrella of the National Welfare Rights Organization (NWRO), which channeled the disparate actions of hundreds of grassroots collectives, these mostly poor black women activists mobilized for more generous benefits, less coercive welfare policies, and child care and consumer credit. But in evoking the utopic aspiration for a land without workers, the song quoted above reveals another less appreciated aspect of NWRO’s political vision which distinguishes it from many other social movements: its radical critique of waged labor.

French Communist Roland Simon has defined antiwork politics as the aspiration that work be neither the center nor the condition for people’s lives. For my dissertation, “Rich in Needs: The Forgotten Radical Politics of the Welfare Rights Movement,” I returned to the archival records of the NWRO and uncovered their robust antiwork political project. In pamphlets, songs, policy proposals, and other texts, welfare activists confronted the notion that poverty could be resolved by more or better jobs, insisting instead that poverty was constitutive of the working class experience. They demanded the “right to live” decoupled from employment in the form of a guaranteed annual income (GAI).

One of the many places this antiwork argument appears is the NWRO’s alternative to Nixon’s welfare reform bill. Proposed in 1970, HR 7257, also known as “The Adequate Income Plan” was endorsed by 21 members of the House of Representatives including the entire newly formed Black Caucus. In the introduction to the bill, the NWRO contends,

The real employment problem is not that people need jobs and jobs need people. It is that employment does not distribute wealth the way its advocates claim it does. As a wealth distribution system employment has never worked well for the poor, especially the black poor. Even if all eligible Americans were employed today, the poverty rate would not be seriously affected.

Existing scholarship on the movement has either ignored this antiwork perspective or insisted the NWRO’s critiques of waged work were primarily gendered – in other words, the mostly female constituents of the movement sought jobs for men and a retreat to domestic lives for women. Ellen Reese situates the strategy of demanding income rather than work as “a product of its time,” emphasizing that “[i]n 1970, only about 30 percent of married women were in the labor force. Like others, the NWRO embraced the family wage system, demanding poor mothers’ right to stay at home with their children.” Denton similarly insists that “welfare recipients focused on mothers’ roles as nurturers and providers. . . Even though many of these women also worked outside the home in low-income jobs, their lives tended to center on home and children.” In a recent coauthored article, Frances Fox Piven and I challenge this analysis, arguing that this common interpretation obfuscates many of the more radical insights and alternatives which welfare recipients envisioned in lieu of waged toil, insights which are deeply necessary today. 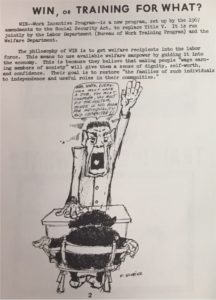 In addition, far from demonstrating an atavistic reverence for the family wage, I found in my close reading of the NWRO’s archives that welfare activists shared much in common with a Marxian analysis of work. In particular, these two different analyses emphasize (1) the coercive nature of waged labor; (2) the institutionalization of poverty for waged workers; (3) alienation inherent in waged labor under capitalism; and (4) the central role of a surplus population or a “reserve army of labor” to the functioning of a capitalist system. Examining these parallels is not to suggest that members of the NWRO were secretly Marxist, or even that many of them were necessarily familiar with Marx; rather, that their analysis of waged labor echoes key elements of Marxian analysis, and that their profoundly radical vision has been significantly underestimated. This interpretation may also lend credence to the belief that Marx’s analysis so aptly encapsulates the working class’ experience of work that across different continents and centuries, people of different races and genders come to similar observations about the nature of work under capitalism.

This is not to suggest that recipient activists in the NWRO all came to the movement with these ideas fully formed – far from it. Drawing on studies of class consciousness by George Rudé, Rick Fantasia, and others, I demonstrate that rather than being fixed and finite, the movement’s analysis developed through the course of struggle. What participants in the movement understood to be feasible or desirable shifted, in a particularly radical direction, as they gained a greater sense of their collective power.

As UBI and other policies that may decenter waged work as the solution to many of our problems gain in popularity, it behooves us to return to the analyses of those who have grappled long and hard with many of the same questions being raised and debated today. Would a guaranteed income cloister women in the home? Does it hold any interest for working class people who are assumed to derive all their meaning from their jobs? How might mobilization around such an issue take place? And more generally — of particular import in a moment in which the desirability of institutions like prisons and borders are finally being questioned – how do activists forge an analysis and an alternative to an institution which is assumed to have no alternative? How, for example, is it possible to conceive of something as inconceivable as “a world without workers”?
Returning to the profound insights developed by the NWRO, scholars and activists alike can enliven our collective radical imaginaries and deepen our understanding of the way mobilization contributes to forging militant working class consciousness.

Wilson Sherwin is a native New Yorker and recently received her Ph.D. in Sociology from the CUNY Graduate Center. Currently based in Mexico City, her work centers around Marxist theory, feminism, social movements, and the sociology of labor.

This article is based upon Wilson Sherwin’s recently defended dissertation Rich in Needs: The Forgotten Radical Politics of the Welfare Rights Movement, as well as her recently co-authored piece with Frances Fox Piven, “The Radical Feminist Legacy of the National Welfare Rights Organization,” which appeared in WSQ: Women’s Studies Quarterly late last year.