This Is Not Normal

This Is Not Normal

We live in unprecedented times. A pandemic shut down public places, businesses and global movement, revealing the farce of global capitalism as it demonstrated we don’t need to work. After the murders of George Floyd and Breonna Taylor, the anger about state-tolerated police violence against Black people turned to rage. Protests exploded in scores of cities across the United States. When governors and mayors imposed curfews, many police officers took this as a signal to release their own rage on peaceful protesters and journalists.

The palpable fear and anger among protesters only accentuated the extraordinary levels of this state violence. Protests against police brutality suddenly shifted on live television broadcasts into more police violence by more threatening tactical law enforcement personnel. Following three years of President Donald Trump stating that the news media are “enemy number one,” it is not a big leap for the police to target journalists reporting on democratic protests with pepper spray, rubber bullets, tear gas, and flash bang grenades. Indeed, this is not normal.

When our call for a special issue of Fast Capitalism entitled “This Is Not Normal” about the Trump era went out last year, we could never have predicted how extraordinarily abnormal our everyday life would become in 2020. However, the more fundamental changes in everyday life after the pandemic are not at issue here. Rather, President Donald J. Trump’s handling of the pandemic’s health crisis, its ensuing economic crisis, and stoking of white supremacy highlights many of the common failures of his “not normal” style of governance.

For months, President Trump decried the coronavirus as nothing but the Democratic party’s new “hoax,” most publicly at a February 28th rally at a time when more than a dozen Americans had already been diagnosed with the disease. To add insult to injury, he continued to oscillate between casting COVID-19 as a legitimate national threat and depicting it as something the Democrats and “the media” (minus Fox News, of course) had overblown. Even as Trump tried to shift to a more serious approach to coronavirus, he appointed Kayleigh McEnany, a known coronavirus-denier, as the new White House Press Secretary.

While our nearly nation-wide lockdown constitutes a moment of extreme abnormality, the Trump Administration’s response to the current epidemic, economic crisis, and movement for Black lives exemplifies the many ways in which the Trump presidency is not normal.

When the editors of Fast Capitalism first made the call for this special issue, we saw the impeachment of Trump on the horizon, but we did not know that it would have much to do with Ukraine. At the time, America was entering full swing into a wild presidential election with considerable focus paid to the Mueller Report on Russia’s interference in the 2016 election. We thought the clear evidence, and the attempted cover-up of the report by Attorney General William Barr was enough to impeach Trump.

But times are not normal. Special Counsel Robert Mueller did not generate gripping enough television to impeach the president, so Congress packed up for its August recess with little planning to convene the impeachment process. President Trump’s use of spectacle has altered most of the scripts for mass media democracy as a political game to reinvent as a 24/7 Twitter and television multi-media circus. No matter how damning and compelling any public information proves to be, if it does not provide good television, then it is rapidly rendered irrelevant.

Since we made the call for our special issue, Trump became the third president of the United States of America to be impeached and only the fourth to face impeachment hearings. In the spirit of “not normal,” Republican senators took the astounding position in their hearings on the House’s two counts of impeachable offenses that yes, what Trump did was wrong – he abused the Office of the Presidency to extort a foreign government (Ukraine) to release results of an investigation of his main political opponent.

But Republican Senators, 1) claimed they could not get into overturning the will of the people; 2) argued Trump had the power as president to do so; therefore nothing here in this instance was illegal; and/or 3) the case of his fitness as president would be judged by the electorate on these and many other issues later in November 2020 election. Republican senators overwhelmingly voted to acquit Donald J. Trump of his impeachment charges with lone Republican Sen. Mitt Romney voting in favor of one article of impeachment.

The Republican capitulation on Impeachment has led to a more actively authoritarian bent by Trump. The nationwide protests against police brutality supporting the Black Lives Matter movement presented Trump with the opportunity to deploy authoritarian rule. In a move reminiscent of the Nazi Party’s irregular paramilitary “Brownshirts,” the Trump-Pence campaign began selling camo “Keep America Great” (KAG) hats on their website. Trump wants to recast his followers as volunteers to serve as a “Trump Army.” 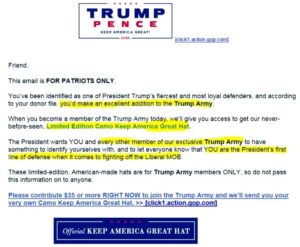 Such an invitation is exciting for many of his followers, since they already show up to many protests openly carrying firearms and wearing tactical field gear. His campaign states to the “Trump Army” that “YOU are the President’s first line of defense when it comes to fighting off the Liberal MOB” (See Figure 1). Since his new federal police forces are often unmarked, there would be nothing to stop the “Trump Army” from showing up to assault protestors, because there would be no way to identify who might have “legitimate” authority. Of course, in Trump’s own advertising of the camo KAG hats, Trump brazenly pretends to give his personal authority to these new partisans for “keeping America great.”

Such unlawful presumptions by the Trump/Pence Re-Election Campaign can be cynically dismissed as a wry amusing effort to market “his message” to his embattled political base. Yet, these values, practices, and ideas have contorted the Republican Party in many states into dreadful caricatures that bears no resemblance to their once more progressive, egalitarian, and unifying visions of America’s popular government.  These paternalistic acts of ultranationalist oligarchy instead appear to be unconstitutional steps down a road that could lead the United States toward more openly authoritarian, if not fascist, modes of rule.

David Arditi is associate professor of sociology at the University of Texas, Arlington and Timothy W. Luke is professor of political science at Virginia Tech.

Check out the special issue of Fast Capitalism. In it, contributors look at many dimensions of the Trump Administration to judge its abnormality against the larger canvas of America’s democratic governance traditions. The essays emphasize both the continuities and discontinuities in the presidency of Donald J. Trump.