Can Digital Tools Be Used for Organizing?

Can Digital Tools Be Used for Organizing?

Explaining digital impacts on social movements requires moving beyond technological determinism by addressing two underdeveloped questions: How does political strategy shape the use of information and communication technologies (ICTs)? And how do divergent uses of ICTs influence movement outcomes? This paper addresses these questions by examining the 2018 educator walkouts in Oklahoma and Arizona— statewide actions initiated through rank-and-file Facebook groups. To explain why the strike in Arizona was more effective than in Oklahoma, despite more auspicious conditions for success in the latter, I show that the impact of ICTs is mediated by leaders’ strategic choices.

Whereas Oklahoma’s strike was marked by mobilization without organization—scaling up protest without an organizational foundation—Arizona used digital tools to build, rather than eschew, organization. Digital impacts further depend on the nature of the contentious performance itself, since the efficacy limitations of relying solely on ICTs are particularly pronounced for actions like strikes.

Mobilizing in Oklahoma, Organizing in Arizona

Spring 2018 witnessed the first U.S. strike wave in over four decades. Confounding all expectations, these actions, beginning in West Virginia, erupted in Republican-dominated states with anti-union right-to-work laws, bans on public sector strikes, and electorates that voted for Donald Trump in 2016. In Arizona and Oklahoma, neither the government nor most educators recognized the unions as the educators’ legitimate collective representative. Instead, a vast majority of insurgent school employees joined the rank-and-file Facebook groups that launched their strikes, Arizona Educators United (AEU) and Oklahoma Teacher Walkout – The Time is Now (OTW).

The potential for ICT affordances to facilitate mass mobilization was clearly illustrated during the “Red State Revolt.” But why was the work stoppage in Arizona, despite unfolding in a less favorable context, stronger than the strike in Oklahoma? In the former, 91.18 percent of educators struck, compared to 72.06 in the latter. Making sense of this puzzling divergence requires shining light on how leadership strategy mediates the impact of digital technologies on movement outcomes.

Numerous scholars have shown how the ICT affordance of lower mobilization and communication costs simultaneously facilitates the potential for a movement to rest on weak organizational foundations. The experience of the 2018 strikes, however, suggests that this is just a potentiality, not an inevitability.

From February 28 onwards, in the wake of the successful action in West Virginia, both Arizona and Oklahoma witnessed a rapid digitally enabled push toward a strike. But whereas AEU’s Facebook admins used social media to promote the high degree of collective organization necessary for a successful work stoppage, such an approach was lacking in Oklahoma. Mobilization without organization, manifest in Oklahoma, was circumvented in Arizona through the following means: first, collective leadership; second, organization beyond a Facebook group; third, an escalated action campaign.

Scholars have examined how digital technologies enable, mass movement leadership by an individual or very small groups, unlike in the past when leaders were generally tied to movement organizations. Yet none have yet examined how the digital affordance of individual leadership can undermine movement efficacy, at least for certain types of protests.

In Oklahoma, OTW’s founder Alberto Morejon opted to run a solo operation. When asked about this decision, Morejon replied that this ensured that the information provided on the page would be “reliable and objective.” He also felt that he had neither the experience nor the free time for a more collective project.

In contrast, though Arizona’s Facebook group was also initially founded by just one individual (Rebecca Garelli), she did not believe that she had the necessary capacity to productively manage and lead this on her own. Through a voluntary self-selection process over Facebook on Sunday, March 4, the eight leaders of Arizona Educators United—none of whom had met before—constituted themselves as the AEU “leadership team.” Through digital co-presence, AEU leaders from across the state coordinated with each other through a Facebook chat, as well as periodic conference calls.

Though the strikes in Arizona and Oklahoma confirm that ICTs drastically lower mobilizing and communication costs, they also show that costs can remain high enough to pose difficulties for solo organizers—even for purely digital tasks. With tens of thousands of members and hundreds of thousands of comments to moderate, being an admin was costly. Morejon explained that the process of accepting member requests into the Facebook group, compiling the list of which school districts were set to strike, making posts, and moderating the Facebook discussion was “like having another full-time job.” Organizers described a similar workload in Arizona. Yet the fact that AEU had eight leaders each providing roughly this level of labor gave them a significantly greater communication and organizational capacity than in Oklahoma. As seen in Figure 1, Arizona’s admins had a daily post average of 16.5 versus 8.2 in Oklahoma.

Figure 1. Number of Posts and Comments 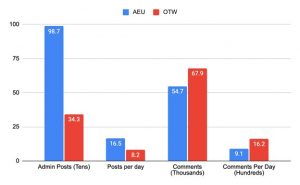 The second mechanism of divergence was that Arizona, unlike Oklahoma, used ICTs to not just promote mobilization, but also to build non-digital organization. While mobilizing — rallying an existing base of support — on its own can often be effective for calling actions like self-selecting rallies or marches, it tends to fall short of maximum efficacy for actions like strikes that generally must a) target heterogeneous, bounded constituencies, b) intentionally win over individuals that are not yet supporters, and c) identify and develop new layers of organic leaders whose accumulated respect at work makes them uniquely capable of winning over waverers.

Oklahoma and Arizona’s divergent digitized strategies illustrate the differences between mobilizing and organizing models, as outlined in Figure 2. Without any organizational apparatus to identify and coordinate a new layer of intermediary leaders, OTW was unable to target and focus on winning over hesitant schools or educators.

Figure 2. Mobilizing and Organizing Models in Oklahoma and Arizona

Oklahoma’s work stoppage was built primarily through ICTs and was a prototypical example of mobilization without organization, with OTW almost overnight becoming the central forum through which the work stoppage was initiated. Yet after the April 2 walkout date was set in the first week of March, the Facebook group served mostly as a communications hub. This approach was in many ways remarkably successful at energizing educators. Yet OTW did not function as a vehicle to consciously target and persuade skeptics. Social media, on its own, proved to be a relatively ineffective tool for targeted efforts to win over the unconvinced.

As seen in Figure 3, Morejon’s efforts were in large part oriented to providing information about schools and the political situation and getting OTW’s members to engage in digital activities such as filling out online surveys. In contrast, these tasks were the focus of far fewer of AEU’s admin posts. This divergence was even more stark when it came to organizational and in-person protest activities. The fact that OTW was far more internally oriented to digital activities than AEU contributed to Oklahoma educators’ total digital engagement being significantly higher, in both aggregate and proportion, than their peers in Arizona, as seen in Figures 1 and 4.

AEU used ICT affordances to establish a network of 2,000 school-site representatives, called site liaisons, charged with organizing their schools and acting as intermediaries between the top AEU leadership and a majority of educators. AEU leader Dylan Wegela underlined the pivotal role of the site liaisons for the movement’s success:

It turned out that the liaisons were the most important part of the movement. They organized their schools, got a sense of where people were at, and served as the channel of communication between the rank-and-file and our AEU leadership team. We couldn’t have done any of this without them. 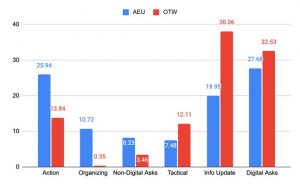 The site liaisons served as the movement’s representatives and conduits at schools to convince reluctant teachers and support staff. To quote Garelli, “If you don’t have a personal relation with people who you’re asking to take a big risk, it’s real hard to convince them to join in.”

Finally, in marked contrast with Oklahoma—where only one preparatory action took place before the walkout— there were 16 distinct preparatory actions in Arizona. AEU leader Noah Karvelis explains the strategic vision that undergirded AEU’s approach: “Everything we did, all those small actions, was an escalation to build power, to build mass organization, in one way or another. It started with easy asks like wearing red, but eventually this built up to harder actions like voting to strike.”

AEU used digital tools to call numerous statewide initiatives and actions, including weekly group photos in red with co-workers; individual “selfies” of educators saying why they were part of the movement; a mass rally of over 6,000 teachers and support staff; a statewide campaign to draw pro-education messages on car windows; three weeks of walk-ins (informational mass meetings with parents, school staff, and students at school sites); and a strike vote in mid-April. 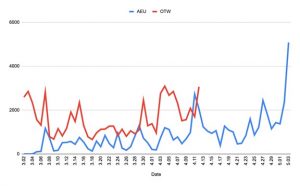 In addition to helping build up AEU’s organizational capacity, these actions strengthened educators’ willingness to engage in a high-risk action. They also let organizers identify which individuals and workplaces are not yet on board. Tracking was thus a central component of AEU’s approach from day one. To quote their March 5 Red for Ed post: “Wear red for ed. Please comment with your school and the number of people that wore red so we can track numbers.” As Karvelis later explained, “tracking what worksites or individuals didn’t participate in our build up events let us assess where we needed to focus.”

In short: Arizona’s strike leaders were more effective than Oklahoma’s not because they eschewed ICTs, but because they avoided their pitfalls by harnessing digital powers to promote organizing, allowing the movement to reach beyond social media’s echo chambers. It was through digital tools that AEU promoted targeted in-person outreach and therefore built a more powerful walkout. In contrast, Oklahoma’s walkout illustrated the potential for ICTs to substitute for non-digital organizing; it also showed the relatively limited outcomes of this approach, at least for actions like labor strikes.

Eric Blanc is a Ph.D. candidate in the sociology department at New York University. In addition to being the author of Revolutionary Social Democracy, he is also the author of Red State Revolt: The Teachers’ Strike Wave and Working-Class Politics (New York: Verso, 2019).