Since Marx’s treatise on the primitive (or “original”) accumulation of capital, scholars of development studies and agrarian political economy have attempted to map out the forms dispossession takes under different periods of capitalist accumulation. Most recently, studies have documented accelerating dispossession in the global south, especially in the post-2008 recession period, for purposes as wide ranging as biofuels production to extractives to speculative investments in real estate. In analyzing these cases, scholars have often emphasized the drivers, the politics and policy mechanisms of dispossession, but very few studies have captured the fundamental political economic transformations that Marx suggested are set into motion as a result of dispossession.

There are some noteworthy exceptions, however, as a nascent scholarship has begun to analyze the longitudinal impacts of the “new enclosures” on agrarian political economies. These studies suggest that land grabs have a stratified and stratifying impact on societies, as those at the top (e.g. wealthy capitalist farmers) are incorporated into the “new” economy as neo-rentiers, labor recruiters or permanent employees—while those on the bottom end up as “footloose” and low wage workers. The customary rights that indigenous communities and others have to commons land are—as they were in Marx’s 18th century England— often ignored by state policy and dispossessed without compensation.

My recent paper builds on this emerging body of research but hones in on a particular aspect which has not been paid adequate attention: dispossession’s long-term impact on rural debt relations. Although Marxists have long noted the fact that debt has a tendency to generate land loss, I “reverse” the chain of causality by focusing on how dispossession leads to a sharp rise in household debt. I show how rising indebtedness is segmented along caste lines, with usurious moneylenders hailing almost entirely from the feudal-era revenue collecting caste (Reddies) and debtors being largely from the former “untouchable” castes. Land loss and the lack of opportunity in the neoliberal economy thus pushes the lower strata into a debt trap. These findings belie common modernist assumptions that market-driven dispossession will dislodge such “traditional” ways of structuring society.

In my paper I trace the fourteen-year trajectory of a community dispossessed of 1,204 acres of agricultural and commons land for a pharmaceutical Special Economic Zone (SEZ) in Polepally village of Telangana, a region in Southern India known for its chronic underdevelopment. During my two field visits in 2009 and again in 2017, I surveyed 52 dispossessed households from each of the endogamous communities that lost land—Dalits (Scheduled Castes, SCs), Lambadas (Scheduled Tribes, STs), and middle castes (Other Backward Castes, OBCs). One of my most striking findings was the colossal (albeit uneven) rise in indebtedness among all three of these groups. In the period between surveys, SCs and STs saw their debts climb by almost 20 times, the majority of which came from informal sector moneylenders, while OBCs’ debt increased by 1.6 times but more from institutional sources. Remarkably, SCs and STs were not just relatively more in debt than were OBCs at the time of the second survey, but they were also absolutely more in debt than their OBC counterparts in 2017.

I point to three mutually enforcing mechanisms (summarized in Table 1) which I argue have led to this situation. The first is discriminatory and inadequate compensation. A significant number of the dispossessed households were beneficiaries of the 1970s Congress Party-backed land reforms. Because of its distinct tenurial type (referred to as “assigned land” in legal proceedings), this land was drastically undervalued and its majority SC/ST occupants were given a meager Rs. 18,000 ($384.45)/acre for their losses. Those who lost patta land—land purchased on the market—on average received almost twice as much as assignees per acre, about Rs 36,000 ($768.90), but this was still far below the market rate. Meanwhile, the upper castes were—by chance or by design—largely spared dispossession, and thus, in the immediate aftermath of land acquisition, Reddy-owned land fast appreciated in value. In these ways, the act of dispossession in itself reversed the outcomes of the 1970s land reforms and further entrenched the village caste and class hierarchy.

Second, for most dispossessed households, the generally low, differential and slow delivery of compensation precluded reinvestment in new productive assets. By 2005, according to government records, the price of land had appreciated to Rs. 700,000/acre, about 17.8 times the average payout to pattadars which explains why very few people were able to reinvest in land based on compensation alone. Additionally, the livestock holdings which once acted as a buffer against proletarianization were nearly wiped out due to the sudden loss of commons grazing land to the SEZ. While 83.3 percent of SC/STs reared livestock prior to the arrival of the SEZ, only 9.1 percent had any holdings at the time of the second survey round in 2017. OBCs too were not spared manifest losses; while 85.7 percent of middle caste households had reared farm animals prior to dispossession, only 23.1 percent continued to in 2017. Still, petty commodity production was a livelihood strategy accessible to less than half of the dispossessed population, in which OBCs comprised the bulk. Their ability to do so, moreover, was typically not based on compensation but rather on what assets were “left over” following dispossession. For the other half of the population, and, indeed, most SCs and STs, compensation was absorbed in ordinary living expenses.

Third, nearly half of the surveyed population was unsuccessful at gaining any sort of employment in the SEZ. Counterintuitively, SCs and STs were disproportionately represented in the other half as compared to their OBC counterparts. However, crucially, SCs and STs were slotted into the lowest rungs of the SEZ’s division of labor. Their jobs were disproportionately casual and low-wage (100 percent of jobs filled by the SC/ST population and 68.8 percent of those filled by OBCs).  Moreover, the lowest wage positions, in which one could earn Rs 5,000 to 8,000 per month as a sweeper, janitor, construction worker, gardener, or scrap remover, were filled entirely by SCs, STs or widows from lower-middle caste households. More remunerative positions in the informal sector were captured mostly by poorer OBCs. Only five respondents (all wealthier OBCs) had secured more stable, salaried positions. The corporatist Reddy community, by contrast, through its internal connections to developers and resource hoarding in new labor and land markets were able to profit handsomely from the SEZ economy.

The result was that, in the years following dispossession, while middle caste households reproduced themselves through a combination of higher paying wage labor and petty commodity production (sometimes backed by institutional loans), proletarianized Dalits and Lambadas gradually slid into a debt trap. The lower strata increasingly were forced to turn to village moneylenders for high interest (36-40 percent) credit—primarily because of their dearth of collateralizable assets (e.g., land) required for institutional loans. While traditional moneylenders do not always require collaterals, they do charge usurious interest rates and employ coercive methods to enforce repayment. This vast expansion of demand for credit by the distressed lower strata, thus, reinforced Reddies longstanding position of social and economic dominance.

In conclusion, dispossession left the proletarianized small farmers, largely Dalits and Lambadas, not only more indebted but indebted to the old agrarian elites to whom they have been subordinated for the past century and a half. Rather than eroding this exploitative relationship rooted in the feudal economy, the neoliberal economy has entrenched it. Given the well-known economic, social and psychological impacts of over-indebtedness and the continued relevance of dispossession as a global issue, the findings of this paper should be of interest to scholars of not only Indian political economy but of other countries where neoliberal dispossession is refracted through longstanding social inequalities. 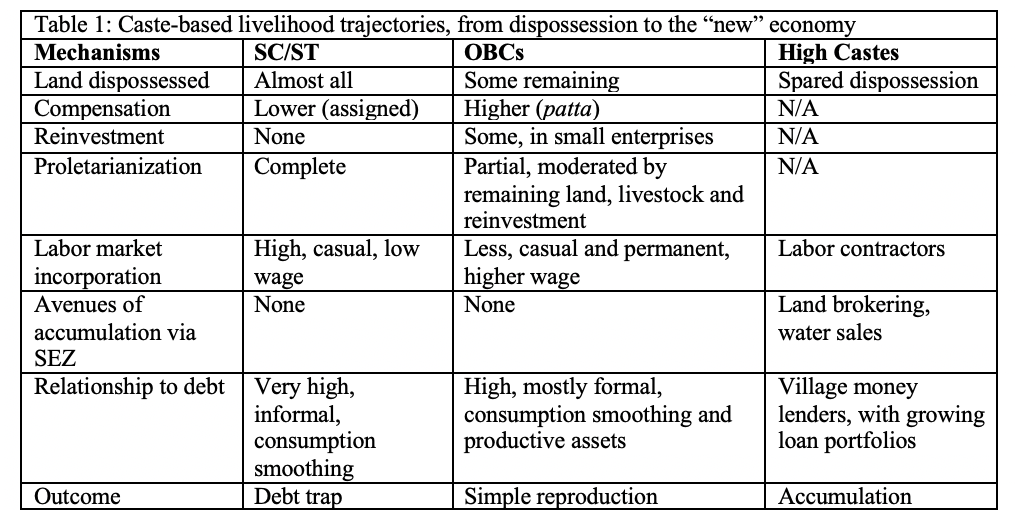 Samantha Agarwal is a Ph.D. candidate in the Department of Sociology at Johns Hopkins University.

To read more, see: Samantha Agarwal, “Indebted by dispossession: The long-term impacts of a Special Economic Zone on caste inequality in rural Telangana” in Journal of Agrarian Change 2021.